For the 1955 model year, Chevrolet’s passenger car was transformed 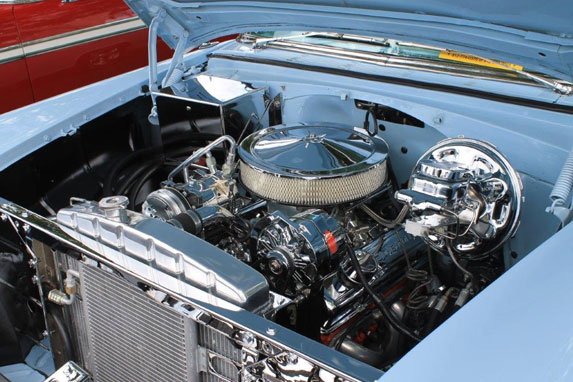 For the 1955 model year, Chevrolet’s passenger car was transformed by a ground-up redesign that offered something that the previous years didn’t– stylish sizzle. The wheelbase and series names, One-Fifty, Two-Ten and Bel Air, were about the only things that were carried over. 1955 brought about big improvements that included better brakes, handling, steering and interior room. New was the 265 cubic-inch V8 (162 hp) and an improved 235 cubicinch six-cylinder engine (123 and 136 hp versions). The Bel Air-based Nomad was also introduced for the ’55 model year. Chevy had transitioned from producing a pedestrian family car to a distinctive, sporty, youthful car. Other than the dramatic new styling, the new V8 was probably the most important feature for the 1955 model– the most changed Chevrolet since World War II. With a slick new body and that powerful new engine, Chevrolet advertised the 1955 as “The Hot One”. Models available ranged from 2 to 4 door, sedan, coupe, station wagon, and convertible. Solid, as well as twotone colors were available with the upper fenders, roof and rear deck painted one shade and a chrome strip molding separating the body side color. Chevrolet produced a record number of cars and trucks in 1955, which accounted for a quarter of all car and truck sales in the United States. The 1955 Chevy had a classic simplicity of design that was a great success, and new power to match! 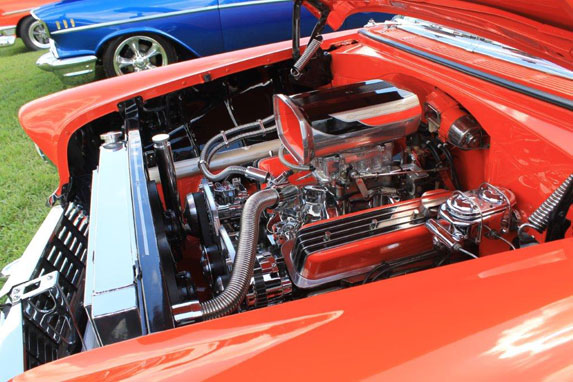 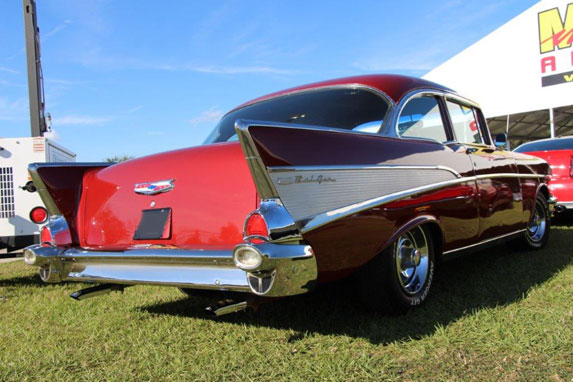 Initially, General Motors executives wanted an entirely new car for 1957, but production delays necessitated the 1955–56 design for one more year. Ed Cole, chief engineer for Chevrolet, dictated a series of changes that significantly increased the cost of the car. These changes included a new dashboard, sealed cowl, and the relocation of air ducts to the headlight pods, which resulted in the distinctive chrome headlight that helped make the '57 Chevrolet a classic. Fourteen-inch wheels replaced the fifteen-inch wheels from previous years to give the car a lower stance, and a wide grille was used to give the car a wider look from the front. The now famous '57 Chevrolet tailfins were designed to duplicate the wide look in the rear. Bel Air models were given gold trim: the grille, front fender chevrons, hood, and trunk script were all rendered in anodized gold. The 1957 Chevrolets did not have an oil pressure gauge or a voltmeter. The base engine was an inline 6-cylinder called the Blue Flame Six. The engine was smoother running than the V-8. Carburetion came from a single one-barrel carburetor.