The 1972 Chevy Impala received a new grille that reached to below the bumper, and the engines were now able to run on unleaded gas. Other federal mandates meant the introduction of the new 5mph impact protection shock-absorbing front bumper in 1973. Both the steering wheel and the instrument panels were now color-matched to the interior colors, and the steering wheel saw the Impala center badge replaced with a Chevrolet badge. In addition, the Kingwood station wagon would once again be known as an Impala in 1973. While production of the Biscayne ended in 1972 in the United States, it actually was still manufactured in Canada until 1975 with a 350 cu V8 and TurboHydramatic automatic transmission. In 1975 the Biscayne even got a new dashboard, climate control graphics and radio and a new optional econominder gauge package and intermittent windshield wipers. 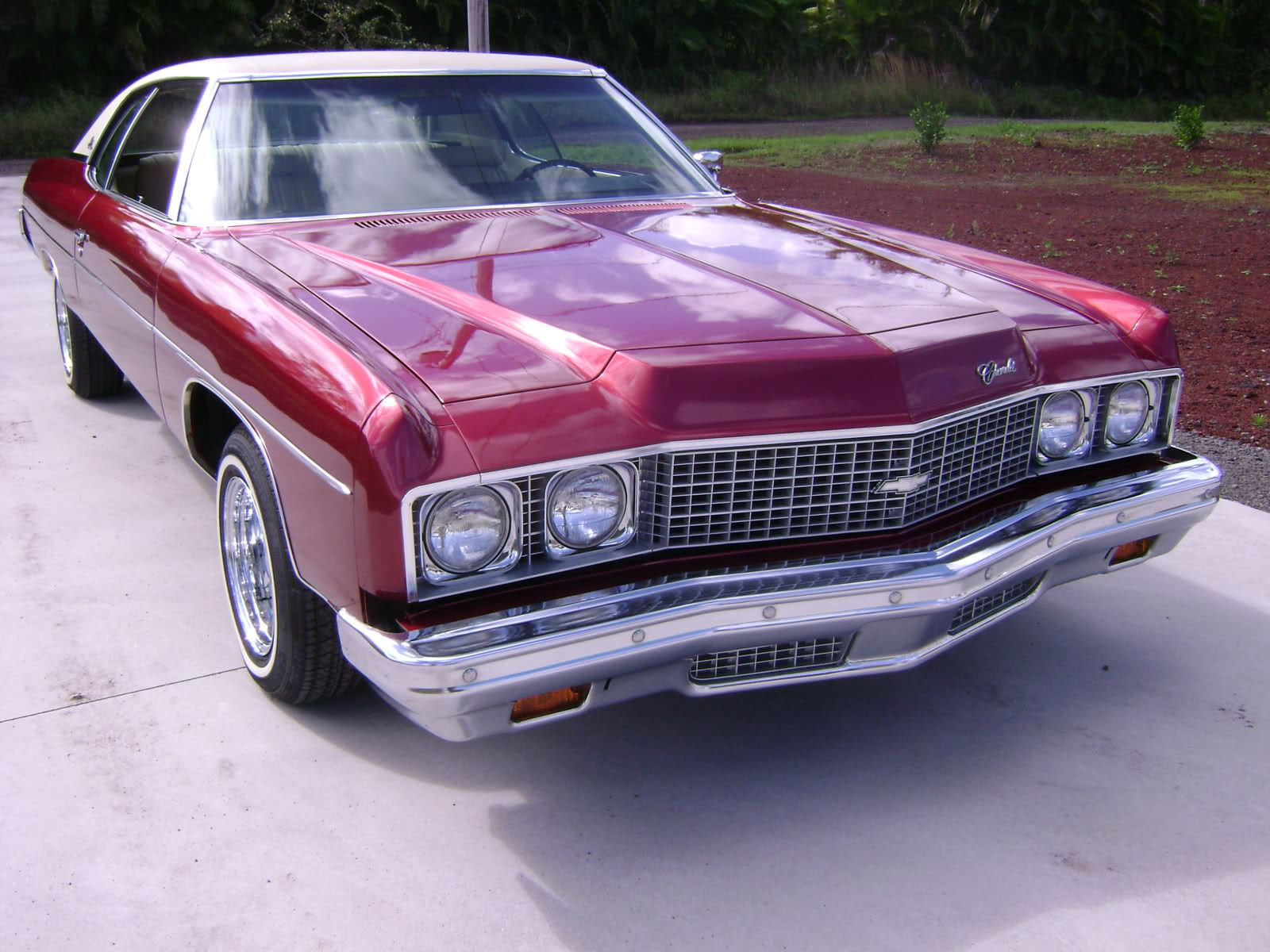 The 1972 Chevrolet Caprice had a new lower body than the 1971 model. It also had a new grille, new bumper and new triple taillights mounted into the rear bumper. All Caprice models now had a new Astro Ventilation system. Turbo-Hydramatic transmission, variable ratio power steering and power front disc brakes were standard, and options this year included 6-way power seats, 8-track player and air conditioning. A new pillared 4-door sedan was added to the Caprice line.

The Caprice was renamed Caprice Classic in 1973. The Kingswood Estate would be called the Caprice Estate. During this year the convertible was moved from the Impala lineup to the Caprice lineup. For 1973 the Caprice would get a new cross-hatch grill, new square tail lights in the bumper, new EGR valves in the engines and lower horsepower ratings. The 400ci 6.6-Litre Turbo-Fire 2-barrel was now 150hp. In 1974 the Caprice received yet another new grille design and the taillights were above the new rear 5mph bumper. The body styles were basically the same for most models, though the 2-door coupes now had thick B-pillars and fixed rear quarter opera windows. There was a new 4-barrel version of the small block 400ci Turbo Fire V8. 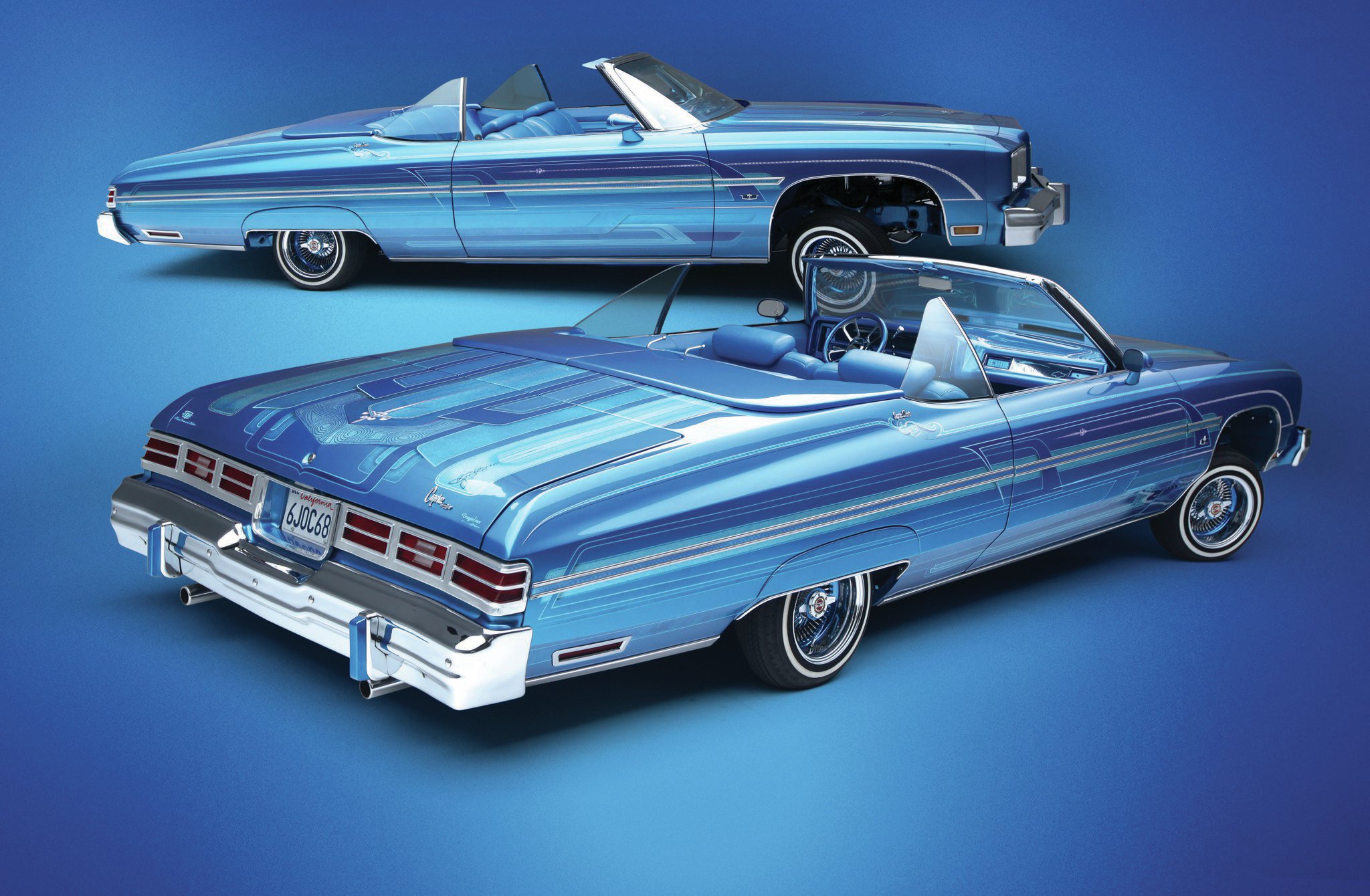 1975 was the final year for the Chevrolet Bel Air. The 1975 Chevy Impala, on the other hand, would get new upholstery, dashboard, door panels, climate control graphics and radio. Kilometers were now added to the speedometers which now read up to 100 mph (160 km/h). During this year catalytic converters and a new HEI (High Energy Ignition) system were also brought in. New options for 1975 included an Ecominder gauge package, divided bench seat with passenger-side recliner, and intermittent wipers. The Landau model was introduced , with a vinyl roof, special paint color choices, dual remote outside rear view mirrors, color-keyed wheel covers, pin-striping and a vinyl bodyside molded insert.

As for the Chevrolet Caprice, 1975 would be the last year of the Caprice convertible. In fact approximately 8,350 Caprice Classic convertibles were sold in 1975. The Chevrolet Landau model was introduced this year, featuring new paint choices, sport-styled dual remote outside rear-view mirrors, color-keyed wheel covers, vinyl bodyside molding insert, pin striping and a landau vinyl roof. New Fender and dashboard emblems were included. This year, due to the focus on fuel economy, Chevrolet made the 350ci 5.7-Litre small block V8 2-barrel carburetor standard on all Caprice models, except for the station wagons. The new GM High Energy electric ignition was introduced this year and along with new radial tires the bundle was promoted as Chevrolets New Efficiency System. There was also a new Ecominder gauge package and other options such as intermittent windshield wipers and a 50/50 seating option.

In 1976 the Landau would remain unchanged. The Caprice Classic had minor changes, including new rectangular headlights, a new grill, and new exterior and interior trim. The engine options were the same, other than a 350 4-barrel that was now available for sedans and coupes everywhere, including California. This was the last year of the hardtop body style and clamshell tailgate design on the station wagon, and the last year of the big blog 454 V8.