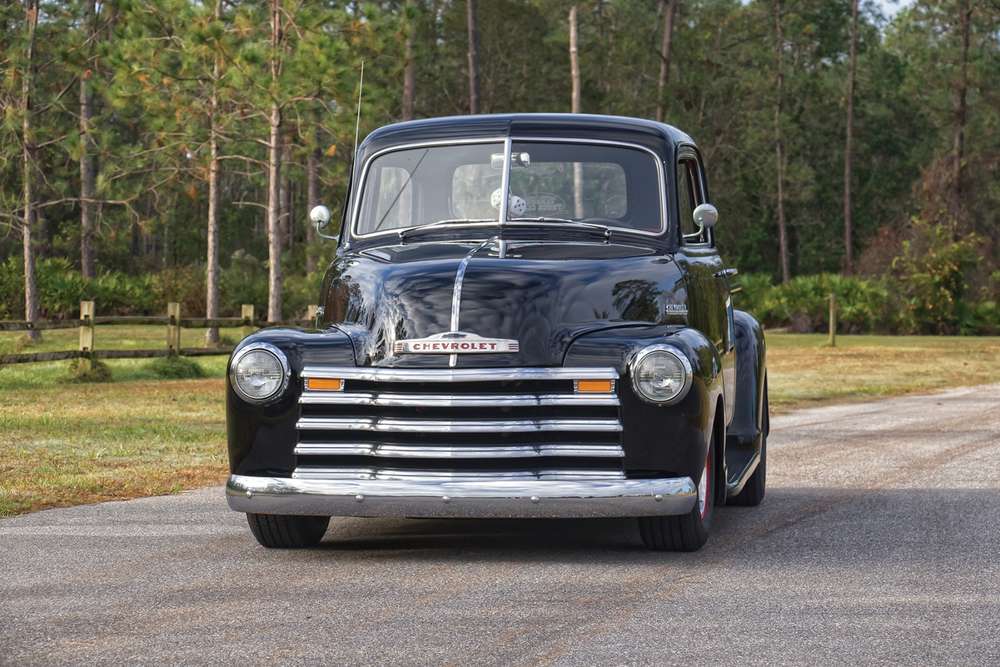 Ron and Cindy Gooden of Mims, FL, are the owners of this 1950 Chevy 3100 five-window pickup. Nicknamed “Black Beauty,” I assure you it’s not just another pretty face. Ron uses this truck to haul hay and grain for their livestock, and it gets driven on an almost daily basis.

Ron purchased this truck in Atlanta, GA, in 2014 after a two-year search to find the right vehicle for him. Ron purchased it from the second owner, who had spent considerable time and resources restoring it. Health issues forced the gentleman to sell it, but it went to a good home with Ron. The truck was originally built in Atlanta in September 1950, and was #16,582 made that year. It was originally Jet Black with a red interior, just as it is today. The original 216.5 cubic inch, 92 HP inline six was long gone by the time Ron purchased the truck, replaced by a 350 cubic-inch V8 crate engine. Other than an Edlebrock aluminum manifold and Edelbrock four-barrel carburetor, the engine is basically stock. He replaced the three-on-the-tree manual with a Turbo 350 automatic, and the rear end has been updated to a Chevy 10-bolt with 2.48 gears. The front end is a clip from a Mustang II, welded on to the original frame. “The frame is original, the seat, dash, body, tailgate, everything on the truck is original other than the Mustang clip with the rack and pinion and power steering,” Ron told me.

The tilt steering column is from an S-10. He added an electric fan to help cool the engine better, and the Vintage Air A/C system helps to cool the passengers. “If you’re going to have a black truck in Florida, you need to have air conditioning,” Ron said, and I couldn’t agree more. When he got the truck, there was a radio in the glove box, which he replaced just before we got together for photos. He added a new Retro Sound stereo in the dash, and there’s a nice big pair of speakers behind the seat where the gas tank used to be. A complete set of in-dash Auto Meter gauges monitor temperature, oil pressure and amperage.

The truck is an older restoration, done about 15 years ago. Ron had to do some work to bring the paint back to its current luster and repair some areas, but it still looks great. The Chevy rally wheels are 15” in the rear and 14” in the front, helping to give the truck a little rake. He added halogen headlights, as well as LED turn signals and brake lights.

My favorite question – Are there any original survivor parts still on the vehicle? – yielded some surprising results. All of the glass is still original, and looks remarkably good. The bumpers, grill, headlight rings and all of the other trim pieces are original except for the mirrors. Dual mirrors were not an option. In fact, even the driver’s-side was optional.

Future plans include replacing the Edelbrock four-barrel carburetor with a more period-correct looking intake with three two-barrel carbs. While he’s in there, he’s going to add a roller cam, lifter and rockers. He’s also going to louver the hood to help improve airflow through the engine compartment to keep that small block running cooler. He plans to repaint it, Jet Black again of course. He will be pulling the bed off and planing and re-staining the wood. He’s going to stain it red to complement the interior. He is also going to shave the fill neck of the gas tank and put a flush-mount cap in the bed. Now that Ron is retired, he has the time and plans to do the work himself. He worked on repairing and painting hot rods when he was younger. In fact, he worked for 15 years in an auto machine shop building custom and modified engines and is a self-proclaimed old Flathead freak. He later went on to work for many years on the space shuttle program.

Ron is an active member of the Central Florida Classic Truck Club, and brings his Black Beauty out to local cruise-ins and shows on a regular basis. The truck has brought home many trophies, though that’s not what Ron set out to do when he bought it. As I mentioned, he uses it for a work truck and drives it on an almost daily basis. Ron insisted that I take the truck for a spin, so I did a few laps around the area where I photographed it. The Mustang II rack and pinion gives the truck a modern, almost nimble feel. If it wasn’t for the ultra-cool five-window cab surrounding you, you could easily forget that this is a 68-year-old truck. Unfortunately for me, even a quick spin behind the wheel left me with a case of the “I-wants.” Like the song says, there’s something ’bout a truck...