A finished product worth the long wait.

I purchased the car in July of 1990 from a gentleman in Cooperstown, NY. He purchased it from his brother-inlaw’s estate. His brother-in-law had no use for the car, as he wasn’t a collector. When he saw my 1956 Black Chevy Convertible Belair in Chevy Classics magazine, he called me to appraise the vehicle. When I arrived, I saw the unrestored 1956 Chevy Belair with dual quads. He had no idea of the value of the car and was shocked when I told him what it was worth and ordered him the full fair market value of the car. I purchased it that same day. When I picked it up the following month, my intentions were to completely disassemble and start immediate restorations to have it completed within a year. A finished restoration worth the wait.

I pulled the body off the frame and put it on a rotisserie. The seats and door panels went to Sam Pizzo of Carl’s Seat Covers to be reupholstered. The chrome and stainless were sent to Bob Orr at Qualkrom to be refinished and restored. After those were completed, my restoration project was put on hold. Hallman’s Chevrolet, the dealership I worked at as a mechanic for 17 years, closed its doors in January 1991, and that same year, I opened my own business: Sam LoVetro Automotive.

Twenty years later, in 2011, I decided to finally pick up the restoration again— this time, hoping to complete it. I rebuilt the entire engine, transmission, frame and chassis.

I started the paint work. The original panels were solid and rust free. I primed it, blocked it with base coat and several coats of clear coat but couldn’t find time to wet-sand and buff the car for another six months. At last, when I completed the paint work and saw the original colors of Dust Plum and India Ivory, I put the body back on the frame and stopped working on it. Over two decades later, I called on Sam Pizzo to install the convertible top. With the top on, I completed the assembly with the bumper s, fenders and trim. Throughout the project, I contacted my good friend of 40 years, Gary Pronesti of Pronesti Classics, for advice and to help me locate hard-to-find parts.

After completing the car days before its first show in Fort Wayne, IN, I took first place in the 1956 Trailer Restored Category—with a score of 995 points. It had been a long, tedious restoration that went from a one-year plan to taking almost 25 years to complete. But I can honestly say when I look at the finished product, it was worth it! 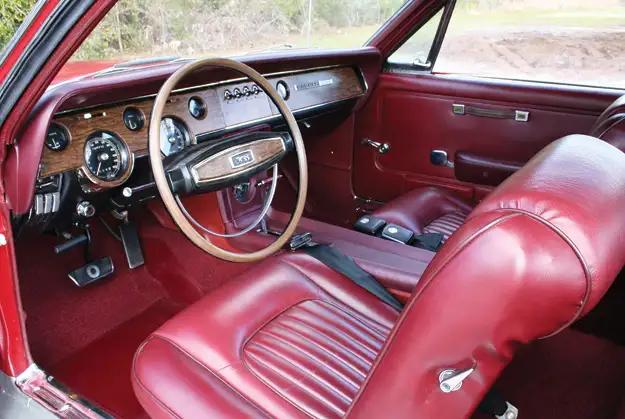